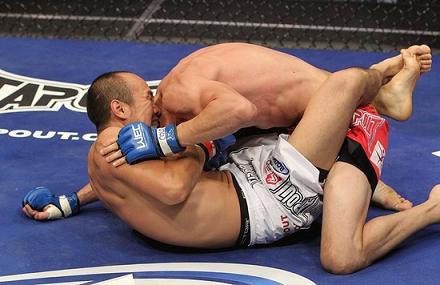 Flaunting the guillotine he's showed off since the WEC days / Photo: Josh Hedges

In one of the UFC 127 fights broadcast over Facebook, China’s Tie Quan Zhang overcame the USA’s Jason Reinhardt with a guillotine just 48 seconds into their bout.

The slick finish came as no surprise to Zhang’s trainer, black belt Ruy Menezes, who has been living in the capital Beijing for the past two years. He trained under Carlson Gracie and later the BTT.

“Besides being the coach at China Top Team, I team Jiu-Jitsu in Beijing. In fact, Tiequan was just promoted to brown belt,” recounts Ruy. “The team’s next challenge is the Legend FC event, April in Hong Kong. We’re going to fight for the under-66kg belt, with our athlete Yaouhungan. He will face a fighter from South Korea, and we’re confident we’ll bring that belt back to Beijing.”