Bitetti Combat: organizers comment on what is to come

The Bitetti Combat organization is ironing out the final details for the event coming up this Saturday, in Barueri, São Paulo. Beasts like Murilo Ninja and Paulo Filho, among many others, will be in action. Promoters of the event Amaury Bitetti and Fernando Miranda comment on what is to come: 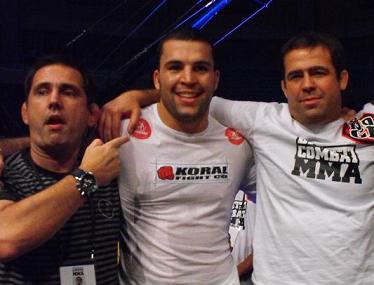 Fernando and Amaury with Murilo Ninja, one of the attractions of the show. Photo: Carlos Ozorio

How are final preparations for the event going?

Amaury Bitetti – They’re going great. The foreign fighters are on their way to Brazil; they are coming from Japan, Holland and the United States. We are in our final preparations and it will be another great event.

After the one in the Maracanãzinho, this installment will be in Barueri. Will there be more events?

Fernando Miranda – Yes, and we are really happy about that. We already have events scheduled for Brasilia, Acre, Amazonas, Paraná and Minas Gerais. Beyond that, events in the Maracanãzinho, in Rio, and in Barueri are confirmed for the next four years.

Is there any possibility of holding events abroad?

Fernando Miranda – We are working on that, too. Bitetti Combat is being spoken about abroad. Even Dana White (UFC president) said that Bitetti is making waves in Brazil to an agent who is our friend. We received offers from Argentina and Venezuela and, if all goes well, we may even hold one in Miami. But that is further down the road. We want to strengthen the event here in Brazil first.

You managed to get backing from the Barueri city government, the government of Rio de Janeiro, the federal government. What are your thoughts about this about-face of MMA?

Amaury Bitetti – It goes to show how well the sport is growing. It no longer has that negative image. MMA was unfairly treated for a long time. Imagine if they were to sacrifice soccer, which is a sport where we see more fights and confusion. There’s none of that. I think the image has changed, if just because of its enormous potential in Brazil and the number of practitioners is huge. For example, the son of the mayor of Barueri, Rubens Furlan Junior, is a Jiu-Jitsu purple belt. In Rio, Marco Antônio Cabral, son of the governor, is a practitioner, too. Martial Arts are everywhere, and in a positive way.