Bia comments her duels against Nicolini 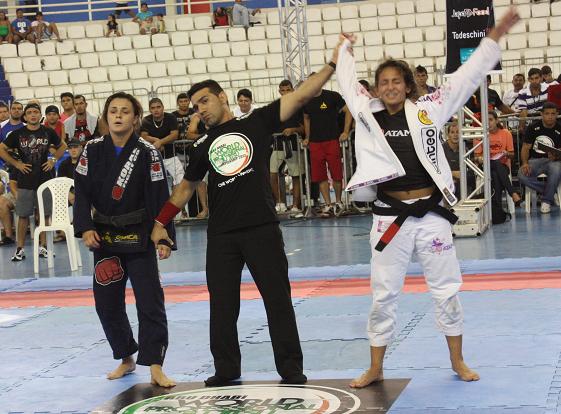 Bia in the finals against Nicolini. Photo: Carlos Ozório.

Beatriz Mesquita enjoyed the no-gi events season of IBJJF. She won by weight and absolute in the Brazilian Championship and was the world champion in her division. In the midst of this rush, Bia put on her gi and fought. Last Sunday, in Manaus, she secured the title in the Trials for the World Professional JJ Championship (WPJJ). In the end, she even defeated her tormentor in the absolute No-Gi World Championship, Michelle Nicolini. GRACIEMAG.com talked to the Gracie Humaitá star.

You just fought the World No-Gi. How was like to fight in Manaus, with a gi on?

I was only training no-gi for the Brazilian and World Championship. I trained only one week with a gi and came to fight. It’s a little different and the fingers get all skinned. But I came with courage to try the trials title.  In Brazil, I couldn’t go to Natal and was thinking of assuring me in Abu Dhabi. I knew it would be a great opportunity to fight in Manaus.

You and Nicolini have made really hard combats…

My fights against Michelle are always hard! We both go for it, so we have to pay much attention not to make a mistake. She is a great athlete and is always on the top. She won the World Championship finals against Kyra won the World Absolute No-Gi  and was second in ADCC. She is an excellent athlete and our battles are very difficult. If you make a tiny mistake, it’s over. We had a very good fight here.

When you were a brown belt, you’ve already defeated many black belts. How is it now to be a black belt and face the browns?

We are at the end of the year. What surprises do you prepare for next season?

The opponent’s strategies change a lot from one fight to another. There are people who pull the guard, who knocks down, who mount … We have to be very complete. I’ll keep training everything and give enough emphasis on fitness, which is what has made ​​much difference among the top athletes. The first championship is European and to face that cold weather, leaving Brazil in the middle of the summer, I wanna be really prepared!