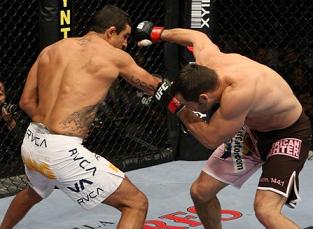 With practically everything in place for him to face Anderson Silva at UFC 112 on April 10, Vitor Belfort is already in Abu Dhabi, along with the Ultimate Fighting Championship committee.

“The weather here is similar to Rio’s,” tweeted the Carlson Gracie black belt this Tuesday.

Besides Belfort, also in the Arab Emirates are Renzo Gracie, his opponent Matt Hughes and Frankie Edgar, who are all on the roster for the first UFC event to take place in Sheikh Tahnoon Bin Zayed’s homeland. The committee visiting the country’s mission is to promote the event and carry out an MMA demonstration. Also expected to be there is Khalifa bin Zayed Al Nahyan, the highest authority in the nation.