The tournament scene is very important in jiu-jitsu’s culture. They are the proving ground for our techniques and can be like family reunions for those of us who have friends at other gyms in other towns and cities.  When a circuit starts to grow, it can have far reaching effects throughout the community.

I recently learned that a circuit that has been growing in the USA is making landfall in Europe in less than two months with their first European event taking place in Bruges, Belgium, on December 2.  AGF (American Grappling Federation) has spent the last few years developing a name and reputation within the jiu-jitsu community as a strong part of the tournament circuit.  The ambitious organization is now joining a small but elite group of tournaments that have a presence in more than one country and on more than one continent. 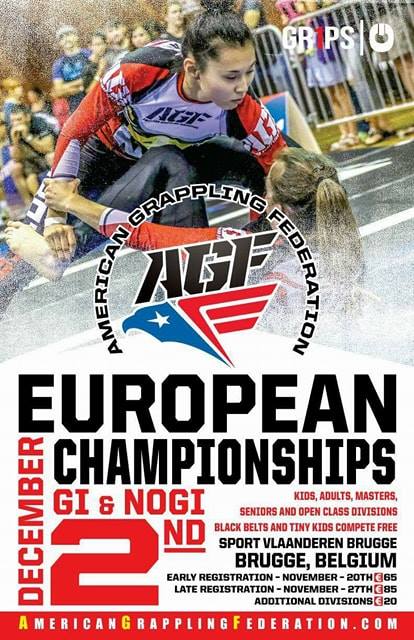 I had an opportunity to chat with one of the tournament founders/owners Brandon Quick about this endeavor, what has gone into growing it and what the future holds.

For starters, I was interested in learning how Brandon started AGF with his partner to begin with…

I am a black belt and my partner is a brown belt. In March 2008 he walked into my school and started training. We were polar opposites but became friends.

I reffed for years for crappy local tournaments, NAGA, and also competed in the IBJJF. I always felt that tournaments could be done better. Some are horribly unorganized and late while some are overly strict with ridiculous money scams. There had to be a happy medium. Something good for kids and adults, gi and nogi.

I’m the tattooed, 100mph, combat vet and he has an excellent background in the tech world. Both of us have the same mentality on being entrepreneurs and have done several things as business partners over the years. We also both love jiu jitsu!

In 2009 we did online training, websites, and moved into the itunes app market. I showed techniques and Chris built the apps. The business was called Killer Apps. We hit the Google Play market as well. We soon started BJJ tournaments and called them Killer Apps Tournaments. Eventually, the app scene became saturated, not worth our time and the tournaments grew big so we had to rebrand ourselves.

The American Grappling Federation was born. Both of us trust each other, are determined and think global so we have had continued success. In terms of expanding we went grass roots. We both live in the Dallas, Texas area so we started there then moved outward 1 city at a time. For example Dallas > OKC > Tulsa > Little Rock > Springfield > STL.

Hands down our biggest reason for growth thou is or pre registration only format. We pass on thousands of dollars by not letting people sign up the night before or day of. Day-of-tournament registration can cause unknown start times, chaos, delays, and disorganization. Our registration ends Monday; Tuesday brackets are done and exposed online, Wednesday the schedule is worked on, Thursday the schedule is released.

Customer service is the biggest priority for Chris and I. We even have door greeters in the morning for new competitors and their families who may not know the process. 12′ wind sail signs are up to help direct people from Check-in to the Store to Brackets to weigh-ins to the Pit. AGF has expanded to Tampa to Phoenix to New Orleans all over the US and now into Europe this December.

I’ve always felt black belts have paid their dues so they are FREE at our tournaments.”Brandon and his partner Chris have clearly established a successful blue print, their tournaments are well regarded throughout the market.  But there are others who have done this, what makes AGF interesting is that it is opening up to the European market, something that very few circuits have done.  I was curious about the process that Brandon and Chris have undergone to get this going.

I have been teaching internationally since 2007. Sweden, Italy, England, Belgium, Germany you name it. I just clocked in over 75 international seminars a couple trips ago. That being said, I have a base of students, friends and the military. Ive taught at USAFB Ramstein a bunch and hope the Armed Forces make a push for it as well.

Even my American friends in the Gracie Barra and Carlson Gracie schools have given shout outs to their European teammates vouching for the quality of AGF.  Its all coming together.

We will grow grass roots there too. Start in Belgium, hit Netherlands, Germany, England and go with the flow! The jiu-jitsu scene is growing there and I’m familiar with everything there from the business systems, BJJ hotbeds to the trains!

Chris has also been to Europe. More for vacation but he also won the Munich Open so he has seen the BJJ scene as well. He has not been to Belgium so I am excited to show him and his wife! We also have AGF crew flying to work and Americans that are competing. I shall be the tour guide this time. Very exciting times.

If you follow several other fast growing circuits, you’ll notice that often the owners who train will go to different cities where they intend on starting events and will make local connections.  Brandon has an interesting take on this.

Another huge factor in our success is what we call ‘PR tours.’ We will go to a city in which we want to grow our market and roll at every school we can early morning, morning, afternoon and night. Roll! Not just show up and pass out flyers or shirts but get on the mats and roll. We all speak the language of jiu-jitsu right? What better way to get on someone’s level?

Sometimes a tournament is owned by guys the competitor doesn’t know or even worse an ‘investor’ that doesn’t even train. We can’t meet everyone but we sure try to meet the coaches and as many people as we can. Chris and I pride ourselves on being completely approachable. People can come to us at a tournament and we can help them, people can email, Facebook, IG or call us on our cell. That’s huge. People like the IBJJF are known for the opposite. It’s nothing new. Everyone who has been exposed to the tourney life knows how some tournaments are.

We are concerned about how people view our customer service. As competitors and coaches ourselves we want the tournament to have a well run, on schedule, phenomenal customer service company that is on schedule. We all know tournaments are ‘for profit’ privately owned companies but why give people a crappy product? We take pride in what we provide and care about the product.

If you are interested in learning more about AGF including their incursion into the European market with their first tournament coming up in Brugge Belgium, check them out at http://www.americangrapplingfederation.com.

The post American Grappling Federation (AGF) To Put On Their First Tournament In Europe appeared first on Jiu-Jitsu Times.