3 lessons I learned from sparring with great MMA idols 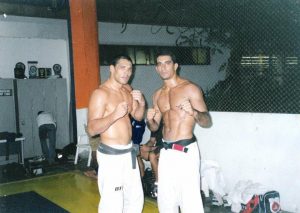 Minotauro and Damasceno after high-impact training in the mid-2000s. Personal archive.

For ten years working as a Jiu-Jitsu teacher in the United Arab Emirates, black belt Pedro Damasceno never forgot the lessons he absorbed in the dojo of BTT Lagoa, in Rio de Janeiro, in the first decade of this century, when he was sparring with great idols of MMA, such as Rodrigo Minotauro, Ricardo Arona, Murilo Bustamante (from whom Pedro received his black belt), among many other stars.

Under constant pressure, Pedro was submitted to the most intense martial arts training, helping the tops of his academy to shine on the Japanese Pride stage. Such lessons Damasceno applies in his life until today, in a wide way, both as a family man, as a Jiu-Jitsu teacher, as a competitor and coach.

“Since the time of the Carlson Gracie Team, when I was still a purple belt, they had already invited me to help with professional No-Gi training, largely because of my height and size, but also because of my gas and the titles that I had been winning in that graduation, in which I was world champion, for example. I was a kind of ‘intern’ among the tops of Carlson’s school ”, recalls Damasceno. “When we went to BTT, I started to help with MMA training. I remember that Arona and Minotauro were still in the Japanese RINGS. Soon after they migrated to Pride ”. 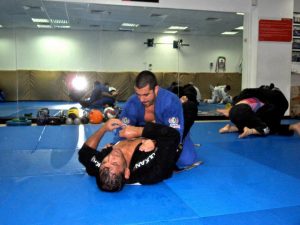 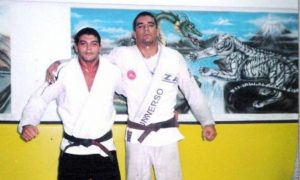 “Minotauro and Arona were sure that the gas would not be lacking in the ring”, says Damasceno.

“Because I am from Niterói, the same city as Arona, we went and returned together for training at AABB Lagoa and became great friends. Minotauro also always helped me a lot, another great friend that the sport gave me, sponsored me for many years, a guy who always helped everyone. The training was a daily war! Land completely mined: Minotauro, Minotouro, Arona, Paulão, Allan Goes, Carlão Barreto, Roan Jucão, Masters Murilo Bustamante, Libório, Zé Mario, among other beasts. I learned a lot from all these stars and I would like to share some of these lessons with GRACIEMAG readers next ”.

“In those days of Pride, BTT idols came in to fight worried about anything but gas. They were sure they would have plenty of gas to speed up the pace or extend the combat as much as needed. The fight changes completely when the athlete can act in this way. The mental part improves, the technique flows much better … Everyone on the BTT team was more certain that they trained more than their opponents. So, I believe that this is a lesson that has always marked me: prepare yourself in the best possible way to face life’s challenges. Train to exhaustion. Practice. Do not spare any effort in the preparatory part and the good results will come naturally ”. 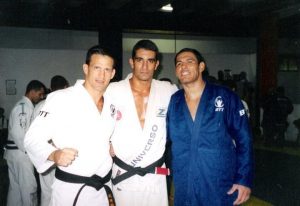 With Bustamante, from whom he received a black belt, and Rogério Minotouro.

2- Have an escape valve

“As the training was always very hard and intense, it was necessary to know how to value moments of rest and also find ways to get out, get your head out of that‘ way under pressure ’. It is not by chance that Arona always tried to stay active in surfing and mountain climbing. I still carry this habit with me today. I like to work hard, but I don’t allow myself to get into a state of emotional implosion, of absolute stress. So I look for activities that take me away from this when necessary, a fundamental ‘reset’. I like swimming, running, cycling, climbing… ”.

3- Learn how to deal with the pain

“One virtue that every sparring has to develop is the ability to deal with pain. If we are going to undergo intense training against the best fighters, we will certainly suffer, leave training sessions with the body ground … In addition to the anti-inflammatory medicine always at hand, you must have mental strength, not walk back because of the pain. To know that it is inevitable and the movement must always be forward. Never go back! High-performance training has nothing to do with training for the well-being of the average practitioner. Every athlete who fought in Pride at that time or who fights nowadays in the UFC is always with some damage in the body, some focus of pain, but they know how to transform this into motivation, do not fail. This is a ‘mental force’ that I try to reproduce in times of adversity in my life. Even though I suffer I can’t let myself be shaken. It is necessary to move on, as did the great MMA idols with whom I trained in the 2000s. ” 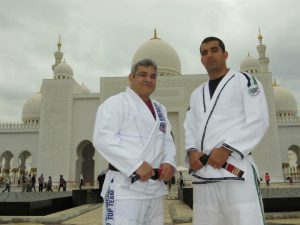 With professor Ricardo Libório, a father figure for Damasceno until today.